Getting rid of SIBO is a step-by-step process. Let me hold your hand and guide you through the process of healing SIBO.

I have compiled a list of SIBO resources with articles, must-read SIBO books, SIBO recipes, SIBO podcasts, and the SIBO diet to help you along your SIBO journey.

​Disclaimer: This site contains affiliate links. As an amazon associate, I earn from qualifying purchases.

Getting rid of SIBO is not as easy as getting diagnosed and taking antibiotics or antimicrobials. I wish it were, but it is not. At least for many people, deeper work needs to take place to get rid of SIBO.

But if you are willing to work through the step-by-step process at a pace that works for your body, I am confident that slowly but surely you will start to notice your SIBO symptoms improve.

And eventually, as you learn how to maintain optimal gut health, you will forget how many symptoms you used to have. Your body is designed to heal and is striving for optimal health at all times. It just needs some help and support from you.

If you are ready and committed to addressing the root causes of SIBO, you can do this! But first, get educated so you can understand your SIBO symptoms and body on a deeper level.

Grab my ultimate gut health guide, where I walk you through some of the questions I ask in my initial consult to help you to identify your trigger foods.

Learn which primary digestive organ is under stress and in need of support. You will also get my top tips, gut-healing foods, and supplements to support each digestive organ.

So, what is SIBO?

During phase 1 of the SIBO diet gut healing support may be needed before providing upper digestive support, such as:

During phase 2 of the SIBO diet, antimicrobials are introduced to kill SIBO. A binder is necessary to bind endotoxins released by dying bacteria. Specific probiotics for SIBO can be used, such as L Rueteri.

After SIBO has been eliminated it is crucial to maintain optimal terrain of the upper digestive system to prevent SIBO from recurring.

Is it the terrain or the bacteria that is the problem?

To heal SIBO for good, both the terrain and overgrowth of bacteria need to be addressed.

After antimicrobials and following the SIBO diet, it is crucial to slowly reintroduce a diverse and wide range of plant-based fiber to restore and build a healthy microbiome in the colon.

Following a low fodmap diet or SIBO diet long term can start to do more damage than good. People need to come off the SIBO diet or low fodmap diet. Probiotics are also beneficial at this stage to reinoculate with beneficial bacteria in the colon after using antimicrobials.

As you can see, healing SIBO is a process. And let me tell you that everyone will have their unique healing journey through SIBO. Listen to your body.

The first place to start with SIBO is to find out if you even have SIBO. A breath test is how SIBO is determined. A SIBO test measures hydrogen and methane gases produced by bacteria in the small intestine. Rebecca Coomes from the healthy gut has an excellent post on how to prep and test for SIBO.

Phase 1 of the SIBO diet developed by Dr. Nirala Jacobi and is the first dietary step used to heal SIBO naturally. As my ultimate goal is to be able to reintroduce a wide range of plant-based fibers, I am more lenient than most practitioners. I use phase 1, phase 2, and the biphasic histamine diet as guidelines.

But, implementing a low fodmap diet or SIBO diet is one of the first steps to resolving SIBO.

I focus on eating low-fodmap vegetables and fruits to cleanse the liver. The SIBO and low fodmap diet are often high in fats, which overwhelms a struggling liver and gallbladder.

Optimizing bile flow for getting rid of SIBO

One of the underlying causes of SIBO that no one is talking about is a sluggish gallbladder and low bile production and flow. I cannot stress enough how crucial it is to have optimal gallbladder health.

Insufficient bile flow is the missing piece to the puzzle for so many people. Optimizing bile flow is crucial for getting rid of SIBO naturally.

I have to thank Dr. Ben Lynch for sharing his knowledge on the connection between genetic SNPs in the PEMT gene, a sluggish gallbladder, and SIBO. SNPs in the PEMT gene can predispose someone to fatty liver, a sluggish gallbladder, and SIBO, especially when someone is choline-deficient. Vegans with SIBO need to pay attention to this!

The chapter on the PEMT gene in Dr. Ben Lynch’s book Dirty Genes is a must-read for anyone struggling with SIBO.

Another genetic component to SIBO is poor methylation or SNP’s in the MTHFR gene. Why? You may ask.

SAMe is needed by the PEMT gene to make phosphatidylcholine. Phosphatidylcholine supports optimal bile flow from the gallbladder. Bile is ANTIMICROBIAL and helps to prevent and get rid of SIBO.

You can read the MTHFR chapter in Dirty Genes to learn more.

Can you see why you need to take a holistic approach and connect all the dots to heal SIBO? Genes require nutrients as cofactors to function, which requires you to eat a nutrient-dense whole food diet so that your body can function optimally.

When it comes to getting rid of SIBO, I am careful with probiotics. Many people think that gut health issues always involve a probiotic. Probiotics are often not beneficial for people with SIBO and can aggravate SIBO symptoms.

But there is one probiotic that I recommend and use in my SIBO protocol, and that is L Reuteri.  This specific probiotic strain has some unique properties to help with SIBO. Lactobacillus rhamnosus is another amazing probiotic for SIBO, IBS and leaky gut.

SIBO can also cause acid reflux that was one of my SIBO symptoms caused by a sluggish liver and gallbladder. Sunflower lecithin and ox bile were the two supplements that I used to get rid of my acid reflux.

I identified SIBO as the cause of my acid reflux as I noticed that corn chips, potatoes, bread, and banana were the foods that caused acid reflux. These foods also contained fodmaps and resistant starches that are fuel for bacteria to ferment.

I also had symptoms of poor fat digestion, so I knew my gallbladder was struggling. I pinpointed the PEMT gene and sluggish gallbladder as the cause of my SIBO symptoms.

After removing my trigger foods and using sunflower lecithin and ox bile, my acid reflux disappeared. Pretty darn amazing if you ask me! Learn more about my story of healing SIBO naturally.

Bloating is also a common symptom of SIBO and a symptom that I used to experience daily. Initially identifying and removing the foods that cause bloating is beneficial to reduce bloating.

Histamine Intolerance is also associated with SIBO as there can be an overgrowth of too many histamine-producing bacteria. Too much histamine overwhelms the DAO enzyme in the gut. The DAO enzyme is responsible for metabolizing histamine.

Reducing high histamine foods can be beneficial along with taking a diamine oxidase enzyme with histamine-containing foods.

Probiota HistaminX is an excellent probiotic for histamine intolerance that I do use even in some cases of SIBO. Probitiota HistaminX helps to reinoculate the gut with beneficial bacteria that help to metabolize histamine
.

Implementing the SIBO diet or low fodmap diet can be challenging, especially if you do not have any low fodmap or SIBO recipes.

Learn more about my genetic story and how I discovered the connection between a sluggish gallbladder, the PEMT gene, and SIBO.

If you need help, reach out. I would love to chat. I know how frustrating getting rid of SIBO can be when die-off reactions occur or if a sluggish gallbladder is the root cause.

I hope that you found some answers to your SIBO problems. It took me years to figure this all out, so give yourself time to learn and get rid of SIBO naturally.

I remember ¼ cup of gut-healthy kefir used to give me a ballooning belly and had no idea why. Now I know it was a SIBO symptom.

If you are reading this post, you are on track and never give up because help and answers are out there. Healing SIBO is not always a straightforward path, but you can never go wrong with educating yourself and listening to your body.

The symptom is there to tell you something. Are you listening to the answers? Always ask what is my body trying to communicate to me? What is causing my symptoms?

A symptom becomes a bigger problem when it is covered up or ignored. SIBO symptoms are your body communicating with you. Are you listening to your body?

Remember, you can beat SIBO. If I can overcome SIBO, you can do it too.

Rebecca Coomes from the healthy gut has a great SIBO podcast as well. 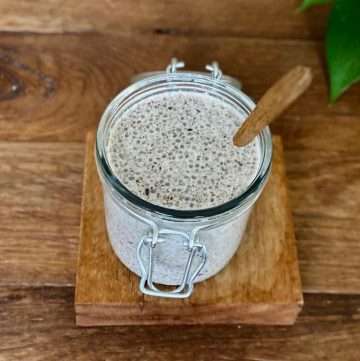