I added a quarter cup of quinoa for additional satiety and plant-based protein. Quinoa is a nutrition powerhouse and my new favorite way to bulk up my smoothies with healthy carbohydrates and plant protein.

The sweet potato banana smoothie is creamy, vegan, is low fodmap, and tastes like a sweet potato pie smoothie that only takes 5 minutes to blend up.

Disclaimer: This site contains affiliate links, as an amazon associate I earn from qualifying purchases.

As a mom of a soon-to-be toddler, smoothies have been my go-to breakfast as they are super quick and easy to make. I have been getting better at pre-prepping for various smoothies to make my morning easy.

Pre-prep for this sweet potato banana smoothie with quinoa by pre-cooking the sweet potato and quinoa. Store the cooked quinoa in the fridge to put in smoothies such as this chocolate quinoa smoothie or quinoa breakfast porridge.

Sweet potato is a nutritious low fodmap root vegetable allowed on phase 2 of the SIBO diet in half a cup per meal.

Sweet Potato is great for weight loss as it contains anthocyanins and carotenoids that have anti-obesity effects. This study shows that the oral intake of anthocyanin and carotenoid extracts from sweet potato significantly reduced weight gain and restored triglyceride levels to normal or lower in mice fed a high-fat diet compared to the mice eating a high-fat diet with no sweet potato extracts.

The anthocyanin and carotenoid extracts from sweet potato also protected the liver from fat accumulation in the liver in mice fed a high-fat diet. Often times people on a SIBO diet are eating a high-fat diet which promotes fatty liver. This is problematic for people with SIBO as a healthy liver that produces sufficient bile is crucial for preventing SIBO. When a liver becomes fatty it struggles to perform its various functions including bile production.

Sweet potato is high in vitamin A and C. These nutrients are essential for optimal immune health. Sweet potatoes contain reasonable amounts of all the B vitamins for energy except for B12. They are also high in manganese to boost the body’s internal antioxidant production as manganese is a co-factor for the SOD enzyme.

Quinoa is a fantastic low fodmap seed that cooks in fifteen minutes and is light and fluffy. Eating quinoa is great for anyone on the vegetarian Bi-phasic diet as it is high in plant-based protein. Plus, quinoa is an excellent source of magnesium, an essential mineral that many people are deficient in. 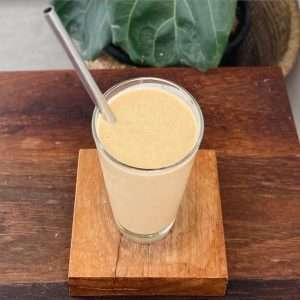 Also, be sure to sign up for my gut health guide and gain access to my FREE resource library with recipe E-books for SIBO and IBS.