Mmm, banana, cranberries, cinnamon, and quinoa are the best combo for a quinoa breakfast porridge that is healthy and satisfying.

This quinoa porridge recipe is excellent for weight loss and diabetics as it is high in magnesium. It contains cinnamon which both help to improve insulin sensitivity and thus lower blood sugar levels.

Disclaimer: This site contains affiliate links, as an amazon associate I earn from qualifying purchases.

Magnesium deficiency is widespread and is associated with obesity and insulin resistance. Eating magnesium-rich whole foods is a great way to promote weight loss and restore optimal magnesium levels in the body. Many people, especially overweight or diabetics, need to supplement magnesium to restore intracellular magnesium levels.

Quinoa is a nutrition powerhouse full of plant-based protein, iron, b vitamins for energy, plus zinc and selenium for immune system support. The fiber in quinoa is excellent for weight loss, and stable blood sugar levels as fiber contains zero calories yet provides satiety and slows down glucose absorption into the blood.

The essential omega 3 and 6 fatty acids are also found in quinoa and the essential amino acids. Omega 3 fats are vital for brain health and promotes weight loss.

There are so many benefits of quinoa due to its nutrient-dense nutritional profile. Start your day right with this delicious and nutritious vegan quinoa porridge with banana, cranberries, and cinnamon.

Anyone looking for magnesium rich recipes with quinoa for weight loss has to try this quinoa porridge recipe. I promise you won’t be disappointed. It is one of my favorite breakfast recipes, especially when I want to be fueled up for the day and feel satiated!

How to make quinoa porridge

It is super easy to make this vegan quinoa porridge recipe. Start by cooking the quinoa by placing ½  a cup of quinoa in 1 cup of water. Bring the quinoa to a boil, then turn the heat to a low and simmer for 15 minutes until cooked.

While the quinoa is cooking, chop up half a banana into quartered chunks and place it in a bowl with cranberries, cinnamon, and coconut sugar. Add the quinoa once cooked, then top with 1 cup of almond milk.

This quinoa porridge recipe makes enough for one person, but you can easily double or quadruple the recipe if you have a partner or family to feed.

Enjoy the vegan quinoa porridge hot or cold. It tastes yummy both ways. If it is hot outside, I enjoy it cold, but if it is chilly, I serve it warm.

I often make a big batch of quinoa to make easy follow-up breakfasts or additional meals with quinoa, such as this Greek quinoa salad. Quinoa also combines well with this homemade vegan pesto.

A tsp of coconut sugar with half a teaspoon of cinnamon is used to sweeten this quinoa porridge. Cinnamon is such a good spice with the banana quinoa porridge for weight loss as it has anti-inflammatory properties and helps to lower blood sugar levels. Substitute coconut sugar for erythritol, monk fruit sweetener, or stevia for a diabetic-friendly sweetener.

You may also like this oatmeal porridge recipe for fatty liver! 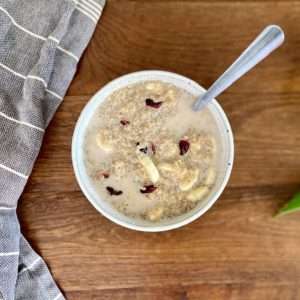 Before you go sign up for my weight loss cheat sheet and gain access to my FREE resource library with recipe E-books for weight loss.