These SIBO pancakes made with almond and coconut flour are nutrient-dense and the perfect SIBO breakfast recipe to enjoy while on the low fodmap or SIBO diet.

The low fodmap pancakes are suitable for phase 2 of the SIBO diet, where you can enjoy a tsp of honey and ¼ cup of blueberries on top.

I spiced the SIBO pancakes with ground ginger and cinnamon, which are excellent spices for SIBO, and make these pancakes super tasty.

Eggs bind the pancakes and are an excellent source of choline required by the PEMT gene to make phosphatidylcholine, which promotes bile flow from the gallbladder.

A choline deficiency is associated with fatty liver and a sluggish gallbladder resulting in poor bile flow. Insufficient bile is an underlying cause of SIBO.

This low fodmap pancake recipe made 1-2 servings—either a giant pancake, two medium pancakes, or three small pancakes. I messed up one of the pancakes during the flip, so I didn’t get a photo of all 3.

I am currently a breastfeeding mom with a big appetite, so I ate all 3 of the low fodmap banana pancakes with blueberries and was full for hours. If you like a lighter breakfast, then you may not want the entire serving.

Either way, you will be satiated off these SIBO pancakes full of protein, un-processed fats, and liver cleansing carbohydrates from the blueberries.

How to make SIBO pancakes

Combine the flour in a bowl and add in the baking soda, cinnamon, and ginger. Stir with a spoon before adding in mashed banana and two eggs. Use an immersion blender to get a pancake batter that is free of any chunks.

Melt a tsp of coconut oil in a large pan over medium heat. Pour the batter into the pan, dividing it into three small pancakes. Flip the low fodmap pancakes after cooking for a couple of minutes on one side. Continue to cook the other side until golden brown.

In a small pot, heat ¼ cup frozen blueberries until thawed and warm.

Serve the low fodmap banana pancakes with a tsp of honey and blueberries.

Before you make these delicious SIBO pancakes be sure to sign up for my gut health guide and gain access to my FREE resource library with recipe E-books for SIBO and IBS. 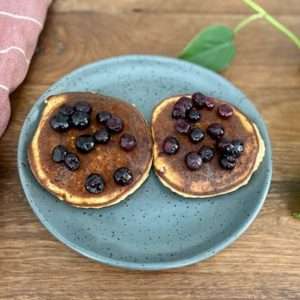 SIBO Pancakes with Blueberries and Banana – Low Fodmap and GF

These low fodmap pancakes made with mashed banana and topped with blueberries are super tasty, filling, and great for anyone of phase 2 of the SIBO diet or following the low fodmap diet for IBS. A combination of coconut and almond flour combined with egg, banana and spices are used to make these nutrient-dense SIBO pancakes.
Print Recipe Pin Recipe
Prep Time 5 mins
Cook Time 5 mins
Total Time 10 mins
Course Breakfast
Cuisine Low FODMAP Diet
Servings 1

Keyword low fodmap pancakes, sibo pancakes
Tried this recipe?Let us know how it was!

You may also like this low fodmap acai bowl and blueberry smoothie for SIBO!