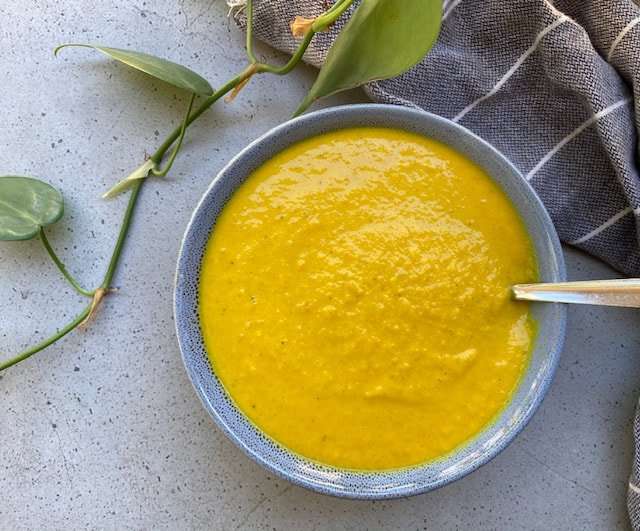 This low fodmap carrot soup is a SIBO friendly recipe that can be enjoyed while on phase 1 of the SIBO diet. The anti-inflammatory turmeric and ginger carrot soup is the perfect SIBO soup recipe to help calm down inflammation in the GI tract.
This low fodmap carrot ginger soup is particularly healing for someone with compromised digestive function, as this soup is easy to digest.
​
The combination between cooked then blended carrot with turmeric and ginger is super soothing for an inflamed GI lining.

Ginger is a culinary herb with properties that:

Ginger also has antibacterial properties that are perfect for SIBO and restoring the terrain in the upper digestive system. Here is a delicious homemade ginger root tea recipe.

This cinnamon-spiced carrot soup made with boiled carrots, sautéed ginger, and turmeric root blended with a touch of coconut milk is then seasoned with sea salt and pepper to taste. You can make this easy carrot soup in 20-30 minutes!

The cinnamon, ginger, and turmeric in this SIBO friendly soup recipe have warming and mildly spicy flavor. When making recipes for the SIBO diet, you got to learn how to spice up your soups with natural spices.

It just so happens that cinnamon, ginger, and turmeric is the perfect combination in this creamy vegan low fodmap soup.

In all honesty, if you need recipes for the low fodmap diet or SIBO diet, I understand your struggle. Finding delicious and healthy recipes allowed on the SIBO diet can be challenging.

So here I am, doing my best to whip up delicious and easy SIBO recipes with what can feel like a very restricted diet. But remember, its only for a short time that you need to follow the SIBO diet. You’ve got this!

As symptoms improve and SIBO is dealt with, you will be able to diversify your diet again. But in the meantime, try making this low fodmap carrot soup with coconut milk. It’s easy to make, creamy, and yummy!

If you’re vegetarian or vegan needing SIBO recipes, this dairy-free carrot soup is for you!

I advise my clients with SIBO to eat as many low fodmap vegetables as possible. Vegetables are nutritious and cleansing for the liver.

Most people don’t know that the liver and gallbladder are primary organs involved in digestion.

Optimal liver health and gallbladder functions are crucial to prevent SIBO from developing. So, nourish your body with this liver cleansing and gut healing carrot soup.

This low fodmap carrot ginger soup makes enough for 2 servings. You can easily double the recipe to make more. I am a huge fan of batch cooking, so you can also make a bigger batch then freeze the leftovers into glass storage containers for easy follow up lunches.

Let the carrots boil for 20 minutes or until tender.

Saute the diced ginger and turmeric root in coconut oil with some salt and pepper for 5 minutes. 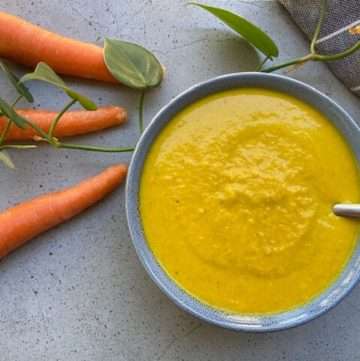 Add additional salt and black pepper to taste 🙂
Keyword low fodmap, vegan, gluten-free
Tried this recipe?Let us know how it was!
Previous Post: « A Review of Strategene and What to Expect From Your StrateGene Report and DNA Kit
Next Post: Why Seeking Health Gallbladder Nutrients are the Best to Optimize a Sluggish Gallbladder »