This fresh ginger root tea recipe is the perfect immune-boosting drink to sip on at the first signs of a sore throat, cough, fever, or flu.

​If you pay attention to those initial first signs of feeling unwell and immediately get rest while sipping on fresh ginger root tea, you will likely be able to reduce the duration of a cold or flu.

For the antiviral properties of ginger root, be sure to use a juicer to press the juice from the ginger root or use a blender to whiz up the ginger root with water, then strain through a mesh nut milk bag.

It takes about 30 minutes after drinking warm fresh ginger root tea for the compounds found in ginger to enter the bloodstream, reaching peak concentration an hour after consuming before declining.

For this reason, ginger root tea should be consumed every 2-3 hours at the beginning of the flu or cold to keep the compounds found in ginger at high levels.

Health benefits of fresh ginger root tea include the following:

Ginger has antiviral properties that can inhibit the attachment of viruses to the cell, stimulates antiviral macrophage activity, and inhibits viral proteases.

Many bacteria use elastase to break down cellular tissue to penetrate and invade the body. Ginger is an elastase inhibitor to prevent bacteria from invading.

Ginger also helps to calm nausea, reduce diarrhea and stomach cramping by relaxing the intestinal wall, reduce fever by stimulating sweating, reduce cold chills, reduce inflammation in the bronchial passageway, thins mucus to move it out of the system, helps to reduce coughing and has pain-relieving properties.

These antimicrobial and antiviral health benefits of ginger root, among others, make fresh ginger root tea a great immune-supporting drink to have in times of feeling unwell or coming down with the flu or a cough.

One of the benefits of ginger root is the oils such as the gingerols found in ginger. These antiviral compounds are much higher in fresh juice, so fresh ginger root tea effectively reduces colds and flues caused by viruses.

The following ginger root tea recipe is potent, warming, and soothing for a sore throat. The addition of honey adds an antibacterial sweetness to take the edge off the lime and ginger.

How to make ginger root tea

Start by thoroughly washing the ginger root and lime, then use a knife to peel the outer skin off the lime before putting it through the juicer.

Put half a cup of the raw ginger through the juicer, followed by one lime, the rest of the ginger, and the last lime through last. After juicing, you should end up with ½ a cup of freshly squeezed ginger and lime juice.

Mix the fresh ginger and lime juice in a large jug with 4 cups hot water and 2 tbsp raw honey and stir to dissolve honey.

Pour 1 cup into a mug and start boosting your immune system as you get some rest. Save the remainder of the fresh ginger root tea to drink in another 3 hours or share with any family or friends that could use some extra immune support!

Cut the limes in half and squeeze the lime juice into the jug using your hands. Sweeten with 2 tbsp of raw honey and enjoy!

When you are coming down with the flu or a cold, the best thing is to rest, sip on this ginger root tea and eat easy to digest soups such as this homemade chicken soup from scratch, creamy beet soup, or thai carrot soup. Digestion takes a lot of energy, so it is best to eat very lightly or not at all so that the body’s immune system can use all its power to fight and overcome a cold or flu. 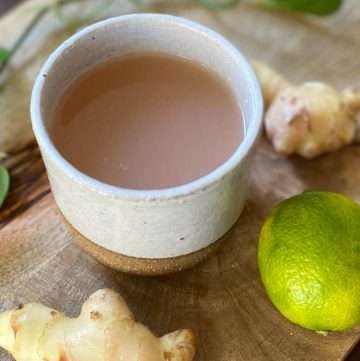